Wii Are Surfing on the Big Screen

A few months ago my wife got up on a Sunday morning at 3:30am and stood in line at Toys-R-Us to pick up a Nintendo Wii for our son.  Neither her or I have every done anything like that before, and trust me when I tell you she's not a morning person, so I was absolutely amazed that she not only got up that early, but even more so that she stood in line in the freezing cold for hours just to get the darn thing.

This afternoon my son and I were playing Guitar Hero III on the xBox 360 and out of the blue decided to finally configure the Wii for Internet connectivity.  As you probably know, Wii has a Wi-Fi adapter built in, but I just never took the time to configure our router and the settings on the Wii.  Well, within a few minutes of our decision we were online surfing the Web on our Toshiba 46" HD TV. 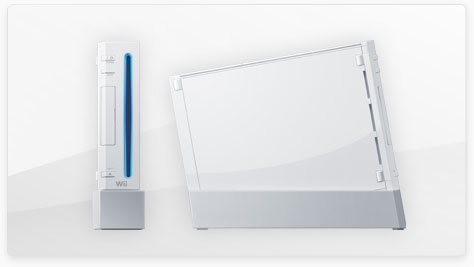 Now before we could surf the Net we had to purchase the Internet browser through the Wii Shopping channel, which in gist cost $5.00 (500 Wii points).  Not a bad deal though given that the Opera browser provided allows you to surf anywhere and everywhere.

Unlike the xBox 360, the Wii's Opera based browser doesn't restrict you to certain channels; you're actually surfing the Web, much like the proprietary PS3 browser.  Entering addresses with the Wii remote isn't all that much fun, but you can easily add sites to your favorites...and you can also connect a standard USB keyboard for a much more efficient text entry experience.

So of course, I immediately wanted to sign-in to Media-Geek.com via the Wii and check things out.  Much to my surprise, everything worked flawlessly navigating the members area through the Wii.  Next, my son went to YouTube to watch his latest favorite Disney music video, Cruella De Vil; again, worked just like we were on a PC.  Weather, News, Webmail, videos, Flash and Shockwave animation...I through everything at it I could think of and the Wii's Opera browser handled it all w/o issue.

The one thing that bothers me is that Nintendo didn't think to release a wireless keyboard sooner.  Apparently they plan to have one out this year, but why not sooner?  It's sort of like, why didn't they make the Wii able to play DVD-Video?  What were they thinking?  It never ceases to amaze me how the three major game system, and now home entertainment system, manufacturers overlook things that you would assume to be common sense.

Personally I'm not a big "gamer", whether PC or console based, but I enjoy the network and interactivity features of the three major systems.  I use our xBox 360 on our network to stream audio & video from my Media Center PC to the big screen, and now can use the Wii to chill on the couch and work on the Web with a full-size keyboard and 46" display.  That is, of course, when my son's not playing either of them.

In addition to my personal blog posts here at DME Resources, I also post product news, tips & tricks to my employer's blog that you may be interested in.

Thank you! Please check your email and confirm the newsletter subscription.